“Elisabeth is clearly a masterful player and intelligent arranger and her interpretations of the old and the new diverge effortlessly into a highly enjoyable compendium of solo music akin to the late great Lyle Ritz.” (Mike Flaherty for Uke Magazine, December 2019)

“(…) a festival favourite across Europe known for her great workshops, her playing & her ace personality.” (TeamGNUF)

“We can‘t imagine a festival without her. She offers a great variety of workshops for all levels and her concerts are beautiful. She is also a very important promoter of our festival! We are lucky to have you again in 2019, Elisabeth!” (Elisabeth Flik – Austrian Ukulele Festival)

“Elisabeth Pfeiffer is one of the few artists in the European Ukulele scene who prove that women can wow an audience solely with their virtuoso ukulele playing and that they don’t necessarily have to sing, although she can! It’s so much fun seeing her rock the stage by herself and together with friends” (Sabina Saracevic – Berlin Ukulele Festival)

“(…) The intensity and care of her play clearly demonstrates not only her feeling for the music and the instrument, but also her intimate relationship with the songs that she has selected for her arrangements, arrangements  that often give the original a more introspective angle, with a delicacy that might not be automatically expected.” (Ben Anderson – Czech Ukulele Festival) 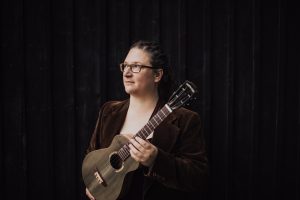 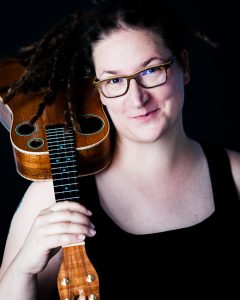 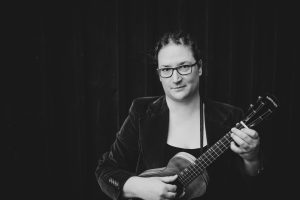 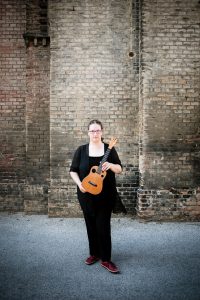 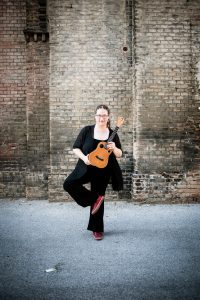 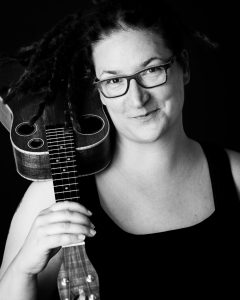 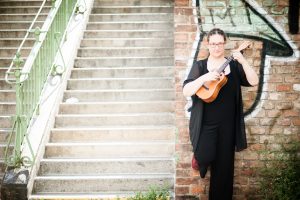 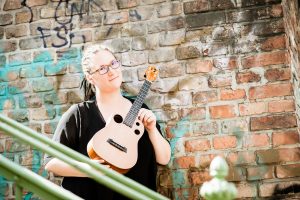 Elisabeth Pfeiffer majored in classical guitar, both at Lawrence University, Appleton, WI, USA and Hochschule für Musik, Würzburg, Germany. In 2013 she took up a ukulele and never looked back. Since, she has written three method books on strumming and picking techniques and fretting concepts. Since 2020 she has published various repertoire books for ukulele solo. On stage she perform solo arrangements of Pop & Rock Songs, Renaissance music and Neue Musik. She is working to expand the solo repertoire for the ukulele with her own works and by commissioning compositions.

Elisabeth Pfeiffer was born in 1982 in Upper Bavaria, Germany, close to the Austrian border, in the ‘Catholic Heart’ of Bavaria. Coming from a family of teachers she was well behaved in Elementary School, always under the watchful eyes of her mother’s colleagues. One of the earlier report cards tells us that she’s always felt strongly about injustice and hated when other kids cheated while playing. Somewhere during that time she held her first ukulele. There is photographic evidence of it, although she herself has no recollection of it and certainly didn’t know it by its righteous name. In those days it was probably referred to as a ‘kids’ guitar’.

Early on she expressed interest in learning to play the guitar, but her parents asserted that there were no guitars for kids and she had to wait until she was big enough. An alternative fact, as we now know. Due to the teacher’s close proximity to her house she started taking Keyboard lessons around the age of 9, instead. And when she was 13 the guitar came back into her life. She borrowed one from a friend who didn’t want to play anymore and started to study by herself for a year. By then her parents had to realize that this wasn’t going to go away and let her have lessons. Three years on, she met her first professional teacher, who actually was a classical guitarist. Before, her teachers had been pianists or hobby musicians who didn’t know much about technique, phrasing or other essentials.

At the age of 16 she sat in a concert that was featuring Brazilian guitar music and, for the first time, she realized that she wanted to do exactly that for a living. Needless to say, her parents were less than thrilled about the idea. Nevertheless, she started practicing for hours a day and prepared to audition after her high-school graduation.

In 2001 she graduated High School and auditioned for several Colleges and Conservatories in the United States, eventually ending up at Lawrence University, Appleton, WI. The day of her departure from Germany marked September 10th 2001 and the year she spent in Wisconsin was an interesting one, to say the least (T’was the year of ‘Freedom Fries’).

After one Academic Year in the States she transferred to the Hochschule für Musik, Würzburg and studied for 9 semesters with Prof. Jürgen Ruck. He fostered an appreciation for Renaissance music and Neue Musik and made her develop her technique to serve musical ideas. Graduating University she took up a job in her hometown’s music school and spent 7 years teaching kids and adults.

2009 she started an artistic photo course in Vienna and got a tiny old and very cheap apartment, which she still has and will keep forever.

In 2013 she quit her teaching jobs and went on a Sabbatical with her partner. The two went on a 3-month bike journey along the US West Coast, from Portland to San Diego. To satisfy her musical needs, she had brought a kid’s guitar, but wasn’t really playing it much. Being on a tandem, her partner constantly complained about the extra weight (like they weren’t heavy enough themselves) and she decided to leave the guitar behind. But she had started to play ukulele in the music shops along the way and finally bought her first ukulele (a blue Kala called ‘Bluesy’) in Los Angeles. That ukulele was later lost in a taxi in Cuba, but when she got to Manila, Philippines in February 2014, she bought a Mango ukulele, which she name ‘Pillipa’. Upon returning to her home town after 10 months of traveling she needed some kind of source of income and started translating for Fundamental Changes Ltd., a company that publishes guitar methods on Amazon Createspace. The CEO Joseph Alexander encouraged her to write a ukulele method. And thus she published ‘Pop & Rock Ukulele: Strumming’ in the fall of 2014 and quickly followed that up by a chord chart and another method book ‘Pop & Rock Ukulele: Picking’.

With much free time on her hands she started to spend more time in Vienna and took up students in the city, while going back to Bavaria regularly. A lifestyle that turned out to suit her and her partner very much. In 2016 she went to her first Ukulele Festival, the Czech Ukulele Festival in Unetice. After having played the ukulele solely for her own personal enjoyment for two years (something that had been a bit lost with the guitar over the years of training), she decided to work on her acquired performance anxiety and play the open mic at the festival. The audience response was quite surprising to her and she was very honored to have the headliners come up and congratulate her on her playing. In May 2017 she attended GNUF, the Grand Northern Ukulele Festival, played Mim’s sideshow and got to know lots of people in the Ukulele world. As she liked the scene more and more, she went to almost every festival she could find in Europe for a few months. Meanwhile, the organizers of the Austrian Ukulele Festival had noticed her and booked her as a workshop leader for their festival in May 2017.

In October 2017 she played on the ‘big stage’ for the first time at the Ukulele Festival in Barcelona.

More and more festival organizers started to get interested in her teaching and playing. So, in 2018, she was lucky enough to become a full-time ukulele player, doing workshops all over Germany and Austria, playing and teaching at Ukulele Festivals in Finland, England, Austria, Czech Republic and Germany.

Needless to say, her need for traveling is quite sated at the moment, as she is touring Europe, while tentatively spreading her wings across the oceans to the US and Asia.